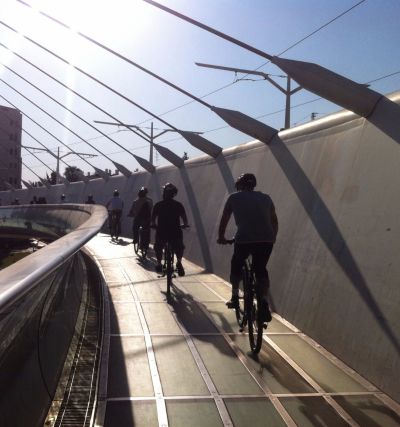 The Bridge of Strings

Don't have enough time to see Jerusalem, but have a few hours left to spend? Our Half day tour of Jerusalem is just for you! See all the sites in this intense, one of a kind bike tour! Our guests that wish to experience all the major attractions of western Jerusalem via bicycle are welcome to join our 3-4 hour bike tour, which includes riding alongside the Old City walls, strolling parallel to the light train, squeezing through the Market's narrow streets, soaking in the sunlight in the Rose Garden, enhancing with inspiration at the Bridge of Strings, and much more. This tour is most recommended for avid bikers that have experience in longer urban bikes, as it is a 3-4 hour long ride. For those who choose to participate in this tour – a condensed, 3-4 hour long, thrilling exercise with a handful of attractions is guaranteed!

Highlight points of the tour:

Rehavia: one of Jerualem's earliest neighborhoods, with highly inclined streets, bohemian café's and picturesque parks, proves a fine addition to this tour.

Photo taken by Noam Chen for the Israeli Ministry of Tourism

What is provided/included and what do i need to bring?

closed shoes (not a must), warm clothes for night rides, Jerusalem tends to be chilly at nights, bottle of water (not a must).

What are my responsibilities as a client?

make sure everyone knows how to ride a bike – intermediate level.

What is the starting and ending points?

the entrance to the Karta Parking lot, Yitzchak Kariv 6 Jerusalem.

What kinds of bikes are provided on my bicycle tour?